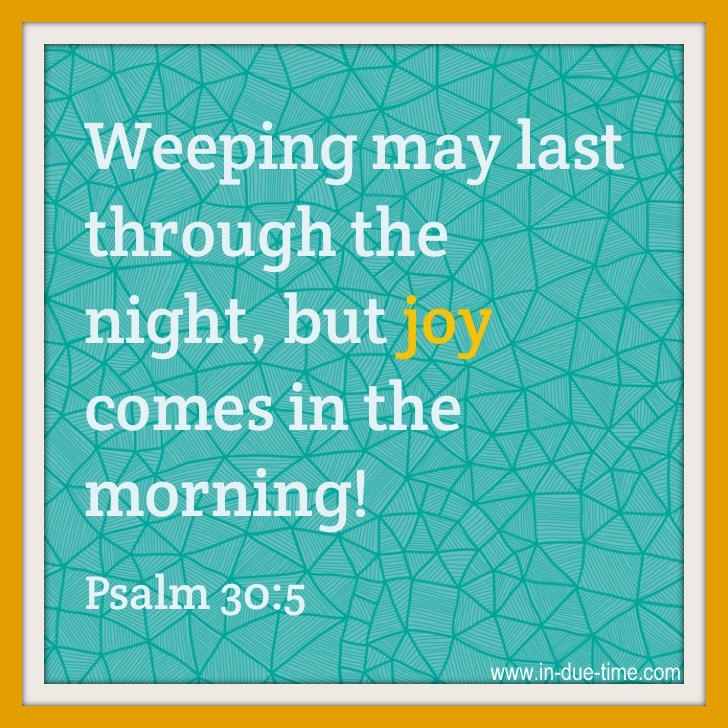 The Lord is so sweet. Wow. He continues to blow me away. Every month Colby and I go into a cycle believing that it will be the month we will be able to celebrate a pregnancy. We are waiting expectantly, asking boldly, and believing our miracle is coming soon. This month my cycle was 5 days late and I thought I was pregnant. I never took a test, but on the 5th late day, AF made a visit. As always, the Lord comforted me. Don’t get me wrong, I was sad. I never lost hope. I was never mad. I never doubted the promises God has for us. I just was sad. Melanie reminded that sadness is a real emotion, but it’s what we do with the emotion that matters most.

I decided to deal with the sadness by digging into the word. As scripture says, Weeping may last through the night, but joy comes with the morning. Psalm 30:5 This was most definitely the case. The Lord told me when I woke up the next morning that He already has an appointed time of when our babies will be born. There is an appointed time for everything. Ecclesiastes 3:1 He knows the details down to the exact second. He already knows our babies names and He already knows everything about their future. It just blows me away that He works every single detail out for our good. I mean, think about it – our future children have to be at the exact place at the exact time to meet their future spouse. Not only the meeting of their spouse, but the day they start kindergarten, the day they go to college, or meet a lifelong best friend (maybe even at an airport), etc.  He has planned their whole future already and has already done the math to back into the exact second that I will conceive. He will use the perfect sperm and perfect egg to create our precious children. I’m grateful it wasn’t this month, because then it wouldn’t be the kids that He already has planned. Why was I late 5 days? I don’t know! But I do know that I’m grateful because those 5 days are setting up the cycle for when we will conceive. When He reminded me of this it brought me so much comfort. I wish I could convey this better in words, but it just blows my mind that I don’t even know how. Wow, Thank you Lord.

Of course the day continued to get better. I had so much precious time with the Lord and spent a long time reading Judges 6 and 7 about the story of Gideon. The Lord asked Gideon to reduce his army size from 35,000 to 10,000. After Gideon obeyed, the Lord then asked him to reduce his army size from 10,000 to 300. 300!! Keep in mind the Midianites army was 135,000. Can you imagine going into a battle with 300 warriors knowing that you are going to face an army of 135,000? Talk about obedience to the Lord. What I loved more than anything about this story was if Gideon’s army still had 35,000 soldiers and won the battle they would have received all the glory. But, instead God wanted everyone to know it was nothing that Gideon did right. It was everything but that. With only 300 soldiers God would receive all the glory. What seemed like nothing (300 soldiers), God turned into a winning battle!!! For us, what seems like nothing (0 sperm), God is going to make babies out of it. He takes nothing and makes it something. All for His glory. This just amazes me. Gideon put all of His trust in the Lord and the Lord encouraged him and guided him. Because of this experience Gideon’s character and faith grew. Praise the Lord.

There was so much I loved about Judges 6 and 7. Besides the story of the battle between Gideon and the Midianites here are some other favorites.

Who else is excited about this right now? The Lord has just overfilled my cup with his joy and peace. I can’t get enough. Oh, and then he reminded me the following morning that if I would have been pregnant I would have missed out on all this precious time with Him. I would take learning more about the Lord’s sovereignty over being pregnant any day of the week! Thank you Lord for your sweet pursuit of me and that you love me enough to have every second of every day planned out. Wow!!!!

What have you been sad about? How do you handle your emotions? Spend time with Him – He is so faithful and always brings joy in the morning!

PS I don’t know Holly that well, but she is a blogger who has been going through a lot this week. Please consider stopping by her blog to leave her some love and/or pray for her. 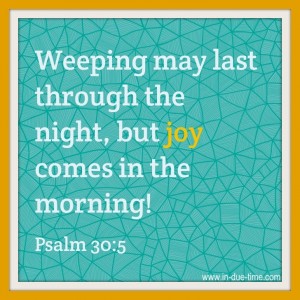