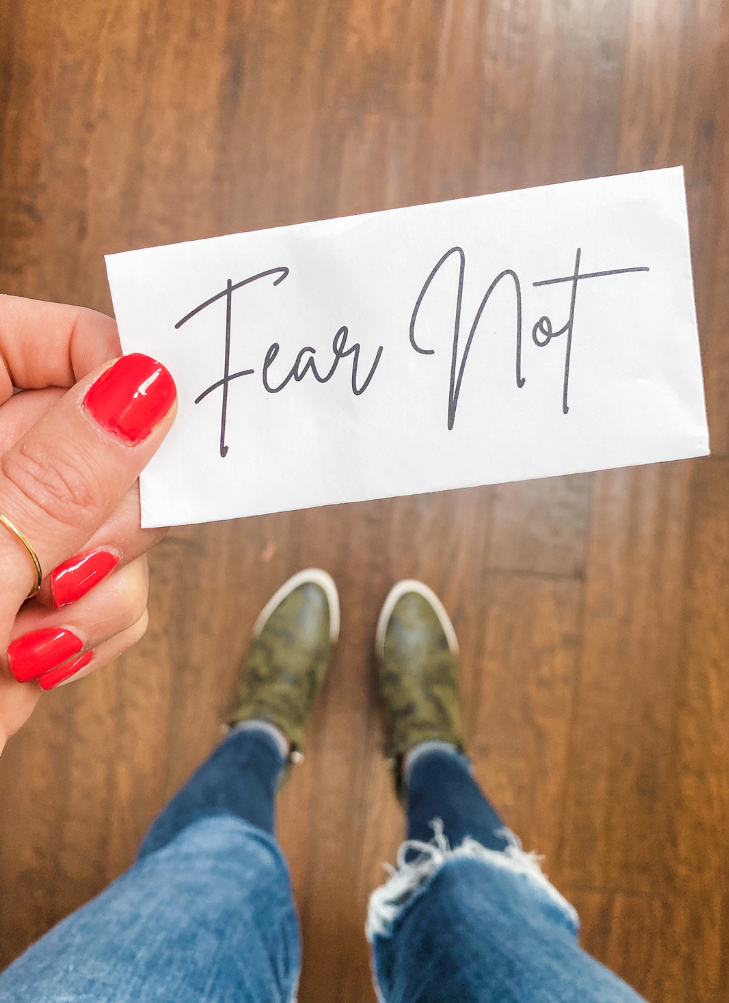 The last three months of 2020 have personally been the hardest for me. They have been met with a lot of change and transition, the majority of which has been very unexpected.

As I have been reading through the Gospels, focusing on the birth of Jesus, there are two words that continue to stand out to me.

“Fear not” and “do not be afraid” are both found several times in scripture, but specific to the birth of Jesus, which I am focusing on today, these words are in three different passages.

The Birth of Jesus

“This is how the birth of Jesus the Messiah came about: His mother Mary was pledged to be married to Joseph, but before they came together, she was found to be pregnant through the Holy Spirit. Because Joseph her husband was faithful to the law, and yet did not want to expose her to public disgrace, he had in mind to divorce her quietly. But after he had considered this, an angel of the Lord appeared to him in a dream and said, ‘Joseph son of David, do not be afraid to take Mary home as your wife, because what is conceived in her is from the Holy Spirit. She will give birth to a son, and you are to give him the name Jesus, because he will save his people from their sins.’ All this took place to fulfill what the Lord had said through the prophet: ‘The virgin will conceive and give birth to a son, and they will call him Immanuel’ (which means ‘God with us’)”. Matthew 1:18-23

“In the sixth month of Elizabeth’s pregnancy, God sent the angel Gabriel to Nazareth, a town in Galilee, to a virgin pledged to be married to a man named Joseph, a descendant of David. The virgin’s name was Mary. The angel went to her and said, ‘Greetings, you who are highly favored! The Lord is with you.’ Mary was greatly troubled at his words and wondered what kind of greeting this might be. But the angel said to her, ‘Do not be afraid, Mary; you have found favor with God. You will conceive and give birth to a son, and you are to call him Jesus. He will be great and will be called the Son of the Most High. The Lord God will give him the throne of his father David, and he will reign over Jacob’s descendants forever; his kingdom will never end’.” Luke 1:26-33

“…And there were shepherds living out in the fields nearby, keeping watch over their flocks at night. An angel of the Lord appeared to them, and the glory of the Lord shone around them, and they were terrified. But the angel said to them, “Do not be afraid. I bring you good news that will cause great joy for all the people. Today in the town of David a Savior has been born to you; he is the Messiah, the Lord. This will be a sign to you: You will find a baby wrapped in cloths and lying in a manger.” Luke 2:8-12

Three different situations regarding the birth of Jesus that the angel declared, “fear not.”

But why? Why fear?

Joseph finds out Mary was pregnant through the Holy Spirit.

Mary finds out she is carrying the Messiah.

The shepherds are near when Jesus was born.

All three of these stories are the perfect recipe for fear. Can you imagine the shock and confusion? Or how about the transition and change that would take place? Or maybe the fear was because of the unknown of the future?

And yet, through the shock, transition, change, confusion and unknown, a declaration was made:

While I can’t relate to what Joseph, Mary or the shepherds were thinking at that time, I can relate to being in a season of shock, transition, change, confusion and unfamiliarity. And I find myself clinging to the very same words that the angel declared over the birth of Jesus.

Whatever season you are in, whether one of change and transition, or one of confusion and unfamiliarity, know that you too can cling to the words in scripture, “Fear not.” It’s a promise you can cling to and a declaration you can make over every circumstance and situation you are facing today.

As I celebrate the birth of Jesus and I look forward to 2021, I myself, in the middle of the chaos and confusion that seems to be surrounding me, am choosing to cling to these two words, “Fear not.” I pray that you do too.

« “Blessed is She” Gift | Wishing You a Very Merry Christmas! »