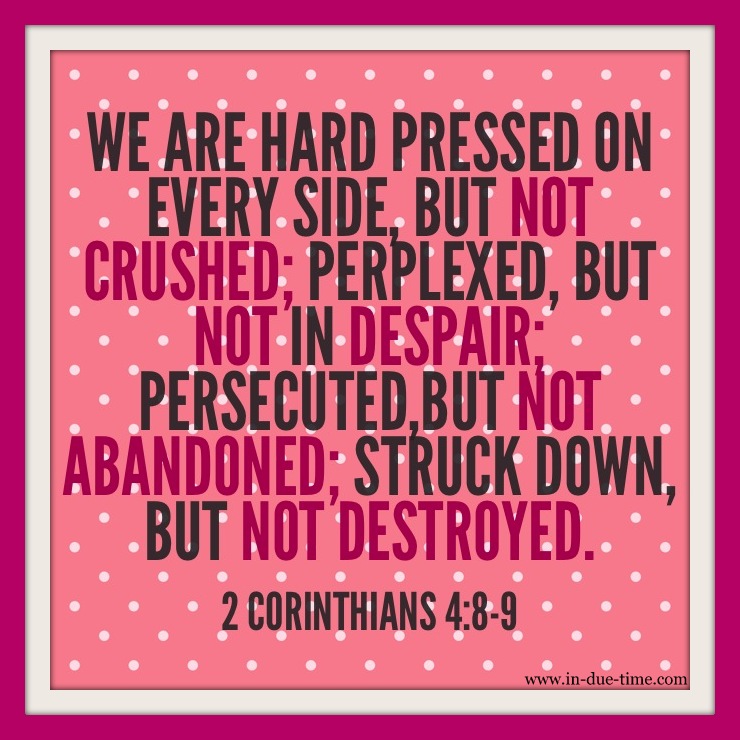 I’m reading through Paul’s letters now and find myself underlining so many verses. I find this verse, 2 Corinthians 4:8-9, incredibly encouraging. It reads, “We are hard pressed on every side, but not crushed; perplexed, but not in despair; persecuted, but not abandoned; struck down, but not destroyed.”

This verse talks about the suffering Paul endured. Paul acknowledged that his work and situations were incredibly challenging, but he did not have an attitude of defeat, anger, or despair.  He recognized the challenges, then praised, worshiped, and pursued the God who is greater and more powerful than any obstacle on earth.  He described his journey as hard pressed, perplexed, persecuted, and struck down. But, he responded by saying he wasn’t crushed, he wasn’t in despair, he wasn’t abandoned, and he wasn’t destroyed.  His hope and faith were on the firm foundation of the God who operates in the miraculous and is in every case victorious – the God who defeated death by raising Jesus from the dead!

If anyone suffered in the bible it was Paul. He went through more than any of us ever have or ever will. When I think of this verse and Paul, I remind myself that the same Spirit who lives in Paul, lives in me and lives in you. Since that is truth, don’t you think we can exhibit this same power of response that Paul had?

Despite all the trials Paul went through, He constantly claimed victory in Jesus. He allowed Jesus to meet all his needs. Just like Paul, everything we go through is an opportunity for Christ to be demonstrated through us and in us. Don’t let your trials strike you down, but let them be an opportunity to preach the gospel and become more like Jesus. 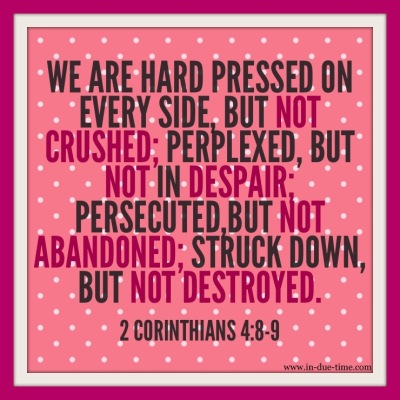