I competed in my 9th, and quite possibly my worst triathlon this past Sunday. The only reason it was the worst is because it was the worst I have ever done. I placed 6th in my age group which was by far my lowest placement and I had my slowest 5K, ever. Double whammy.

This race was another race with Playtri which means now 8 out of the 9 I have done have been with their company. I love that they offer one at least every month. There was no swag bag again, but they did give a medal, unlike the last race I did, which didn’t. Even though I must say the medals they offer aren’t nearly as good as they used to be. This was also the first race that I didn’t get a chiropractor adjustment after, which is usually what I look forward to the most. Anyway, overall they put on a great race, which is obvious since this is my 8th one.

The morning started off when Colby told me around 5:30 am that my bike had a flat tire, neither of us knowing how to change it, we moved as fast as we could and got to the race site where I asked some gentleman to help and he agreed. Thankfully it was super easy and turned out to be no big deal.

Overall it was a beautiful morning and although hot, was really pretty nice weather. I was excited about a new course as this was my first time to do this race. The race started out with a 500m open water swim, which for the most part went well. It was my first open water swim of the year and unlike all the other open water swims I have done, this one started as a time trial, meaning just two people started at a time, which was so much better than the mass wave start that I am used to. I felt like I stayed on course the majority of the time, but towards the end I definitely ran into the outskirts of the pond. I am pretty sure a volunteer was yelling at me, but I know I hit the ground before hearing him. Veering off course sure didn’t help my time, but I still managed to make the top 15% of all swimmers at the event, so as always, that was by far my best leg of the race.

The bike was one 11 mile loop. I’ve said this before and I will say this again, I have got to get a new bike! I was so uncomfortable by mile 3 and everyone was flying past me on their tri bikes. The ride went on what felt like forever and the wind was so bad I felt like I was barely moving. I’m always so glad when the bike portion is over and Sunday morning was no different. I was just so thankful we found out about the tire before the race and not during.

My stomach was really hurting at this point, but I pushed through the run, knowing that I would have to run very slow. My time sure did show for it and I was shocked with just how slow I ran, but I felt if I were to run any faster I would have vomited. Bleh. The run was a 5K out and back, which I think is so much better than a loop because you get to see other people on the course, which makes it more motivating. I wore my new shoes that I mentioned last week and had no foot pain, so that was a plus. But clearly they did not make me go any faster.

I was so glad to be finished. So so so glad. I had to lay down for a few minutes after because I was feeling so crummy, but I am not sure what I expected as just the week before I wasn’t able to run over 2 miles without quitting so I shouldn’t be too surprised with how poor I did. Anyway, I was just so relieved when it was over. Finishing is really one of the best feelings, ever! 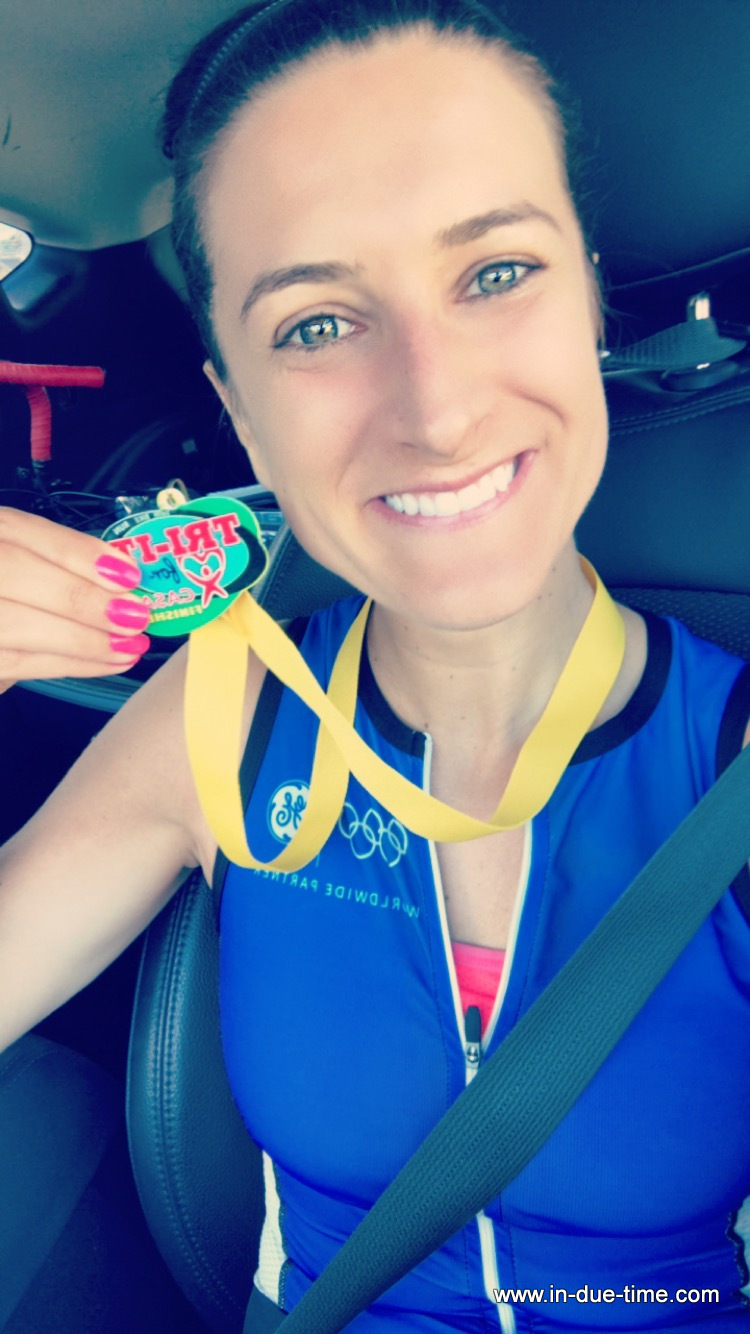 I was provided complimentary race entry as compensation for this blog post. As always, all opinions are my own and I have given honest feedback on the race and course. This post contains affiliate links