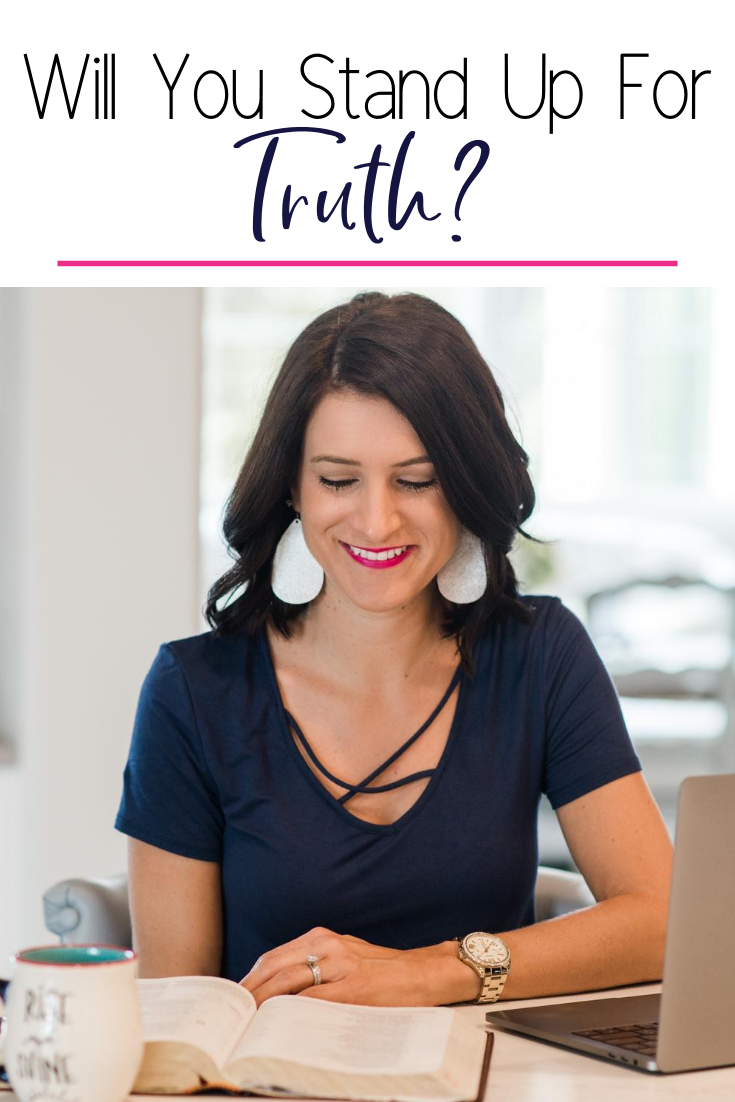 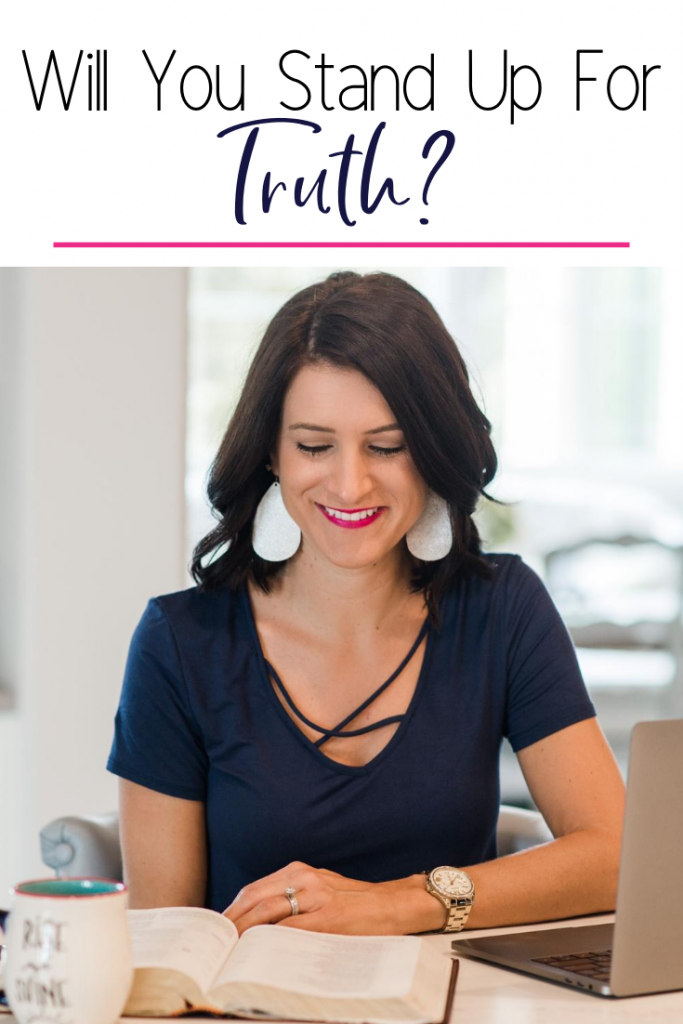 Will you stand up for truth?

I have had this post sitting as a draft in my account for over a year. I thought in 2019 the truth was being compromised, and it was, but I had no idea what we would be facing in 2020. There was a reason the Father had me sit on this for so long.

It’s no secret that the message of truth, the Bible, has been so watered down. For some reason Christians think they get to pick which verses they want to believe and which ones don’t apply anymore. We think compromising Christianity is okay.

Yet, my Bible addresses this topic all throughout and sends a much different message.

2 Corinthians 2:17 says, “For unlike so many, we are not peddlers of God’s Word who water down the message. We are those sent from God with pure motives, who speak in the sight of God from our union with Christ.”

2 Corinthians 4:2-4 says, “We reject every shameful cover-up and refuse to resort to cunning trickery or distorting the Word of God. Instead, we open up our souls to you by presenting the truth to everyone’s conscience in the sight and presence of God. Even if our gospel message is veiled, it is only veiled to those who are perishing, for their minds have been blinded by the god of this age, leaving them in unbelief. Their blindness keeps them from seeing the dayspring light of the wonderful news of the glory of Jesus Christ, who is the divine image of God.”

Wow! That passage cuts to the core.

Proverbs 4:26-27 might be my favorite when it comes to the topic of not compromising the truth. It says, “Watch where you’re going! Stick to the path of truth, and the road will be safe and smooth before you. Don’t allow yourself to be sidetracked for even a moment or take the detour that leads to darkness.”

Hebrews 2:1-4 gives us a similar warning in regards to not drifting from truth. It says, “This is why it is so crucial that we be all the more engaged and attentive to the truth that we have heard so that we do not drift off course. For if the message of the law spoken and confirmed by angels brought a just penalty to every disobedient violation; then how would we expect to escape punishment if we despise the very truths that give us life? The Lord himself was the first to announce these things, and those who heard him firsthand confirmed their accuracy. Then God added his witness to theirs. He validated their ministry with signs, astonishing wonders, all kinds of powerful miracles, and by the gifts of the Holy Spirit, which he distributed as he desired.”

1 Peter 1:14 says “As God’s obedient children, never again shape your lives by the desires that you followed when you didn’t know better.” Do you realize that when you know the truth, ignorance is not an excuse? We know this because of Romans 1:19-20:

“For what can be known about God is plain to them, because God has shown it to them. For his invisible attributes, namely, his eternal power and divine nature, have been clearly perceived, ever since the creation of the world, in the things that have been made. So they are without excuse.” I love the Passion translation of this verse “Opposition to truth cannot be excused on the basis of ignorance.” Can I get an Amen?

In some ways, I don’t think many Christians even realize they are compromising the Word. Why? Because they have no idea what it even says. But according to scripture, ignorance is not an excuse!

Scripture actually makes it very clear that knowing the truth and refraining from sticking to it is considered sin. Hebrews 10:26 says, “Dear friends, if we deliberately continue sinning after we have received knowledge of the truth, there is no longer any sacrifice that will cover these sins.” And James 4:17 says, “So if you know of an opportunity to do the right thing today, yet you refrain from doing it, you’re guilty of sin.”

To be honest, these verses probably barely scratch the surface of this topic, they just happen to be ones that I have read recently that stood out to me, but I know there are many more.

So what do all these mean? Well hopefully they open up your eyes to understanding that compromised Christianity is not okay. And that compromise? It usually doesn’t happen overnight. Just as I shared a few weeks ago, it is usually a very slow fade.

Not only that but two years ago I wrote on what it means to be a lukewarm Christian. I encourage you to check out that post here. The Lord is looking for laid-down lovers who are whole-heartedly running after Him. What He is not looking for is men and women who choose which parts of the Bible they want to believe and obey.

Following Jesus means we don’t get to pick which scriptures we like and which ones we don’t. When it comes to heavy topics that we think we can compromise on, we can not. The truth is the truth and scripture is very clear that God honors those will stick to it. John 12:26 says, “If you want to be my disciple, follow me and you will go where I am going. And if you truly follow me as my disciple, the Father will shower his favor upon your life.”

So what compromise am I referring to? I could pick any topic, and address how Christians have made that topic okay. The list really is endless but I will choose one: Sexual sin. Do you know there are 100+ verses that address sexual sin. 1 Corinthians 6:18 is one I was reading recently. “Flee from sexual immorality.” I don’t know if God could make it any clearer. So why have we decided that sexual immorality is okay? Again, this is just one example of many.

Instead of us dragging our feet, annoyed that the Lord gave us so many scriptures, clearly outlining what is considered sin and what breaks His heart, what if we considered it His kindness? He loves us so much that He doesn’t want to see us get distracted and fail, which is why He gave us guidelines — to protect us and see us prosper. Isn’t that amazing? Which means He gave us 1 Corinthians 6:18, which I mentioned above, because He loves us and knows that sexual immorality is harmful to us.

In the midst of this message I think it’s also important to also remember this: you and I are not of this world. James 4:4 says “Whoever chooses to be the world’s friend makes himself God’s enemy!” The person that becomes friends of this world, becomes an enemy of God. Wow! Would a friend compromise their relationship by going out of the boundaries and doing what they want? No, of course not. The one that loves God, His friend, will take delight in keeping His commands (John 14:15).

I absolutely refuse to compromise the truth. What about you?

Are you someone who will stand up for truth? Will you be a Christian that won’t back down when the world tries to justify things that God clearly states in scripture are sin? Will you refuse to compromise your beliefs? Are you committed to living by the Word and not by the world?

If you have compromised the truth, I want to encourage you that there is an invitation for you. There is an invitation to repent! To seek the Lord and turn from your ways. Today is a great day to admit that you have messed up, which we all have, and to re-dedicate your life back to Him. He loves you and desires for you to look more like Him.