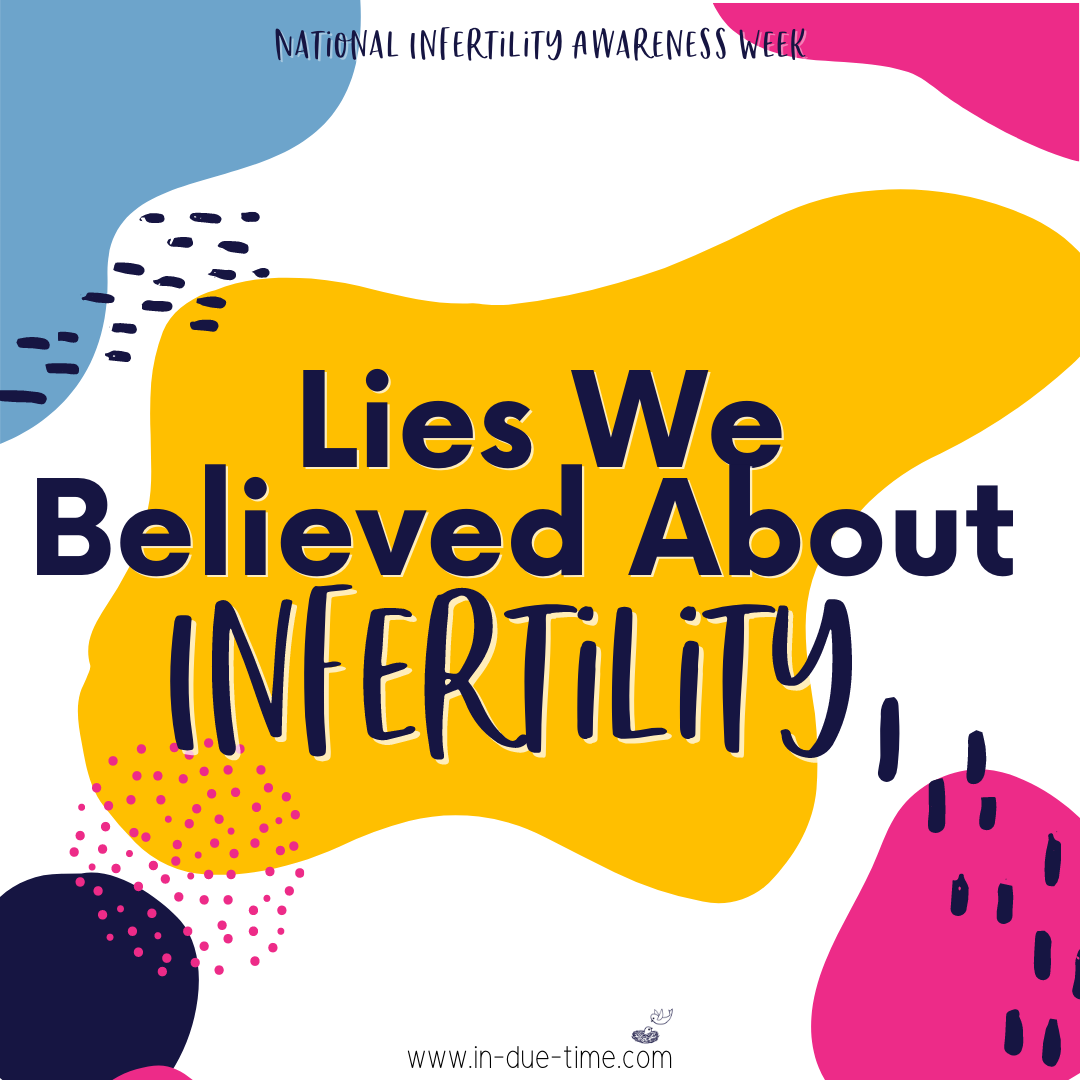 It’s time for my 8th annual National Infertility Awareness Week collaborative post. This year I asked the Moms in the Making support group leaders what lies they believed about infertility and what truth from God’s Word they are replacing those lies with! We hope these answers bless you and remind you to keep your focus on Him! And we hope if you haven’t already found a community to get plugged into, we hope you join Moms in the Making.

Lies We Believed About Infertility And The Truth We Replaced Them With.. 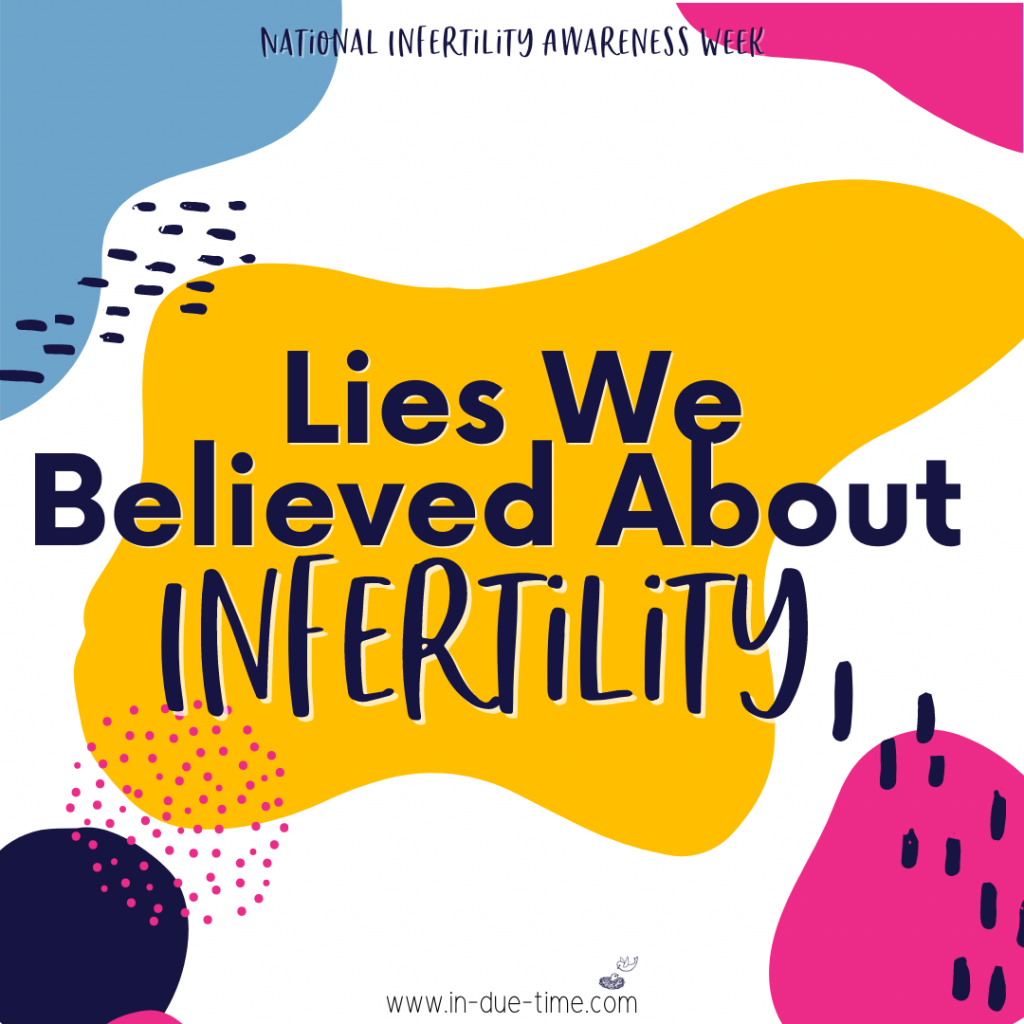 Abby Garcia | Slidell, LA – The lie I believed is that I was not enough because doctors said I couldn’t have kids, but the truth is that Jesus gave his life for me because I am enough for him, and doctors don’t have the final word.

Amanda Jernigan | Dunn, NC – The lie I believed was God wasn’t fighting for me when I was facing infertility, but the truth is he already had a plan for my journey to motherhood and had a plan far greater than my wildest dreams. I am now a mom to four babies through adoption and foster care. He makes beauty from ashes and redeems broken stories to show his goodness. Never once did I walk alone.

Angela Lee | Camden, SC – The lie I was tempted to believe was that I had done something wrong and my punishment was infertility. The truth is we serve a good Father and he does not punish his children by giving them infertility. He doesn’t give it to us at all because it’s not from him.

Beth Cacciapalle | Clinton Township, MI – The lie I believed was that I had to strive/do works to get a baby but God’s truth is I can rest in him, his yoke is easy and his burden is light. Once I stepped into his rest, everything shifted.

Britni Mazur | Cold Lake, Alberta – The lie I was tempted to believe is that because I was watching other women receive their miracle, God had forgotten about me, but the truth is that it is impossible for God to forget about me or anyone else (Isaiah 49:15-16).

Brittany Mulinix | London, OH – The lie I was tempted to believe was that there was no hope in becoming a mom, but the truth is that there is always hope with God and He will fulfill His promises!

Brooke Simkins | Orland Park, IL – The lie I was tempted to believe is that God could do it for someone else, but not me. But the truth is that God’s word is for me, and that he was working on a miracle all along!

Crystal Torres | Ridgewood, NY – The lie I believed is that because I received a diagnosis from the doctor that I would never be a mom, but the truth is that when Jesus says yes no one can say no! Jesus has the final say, not any doctor, not my family members, not my friends but only JESUS! His promises never return back void and while I’m in this waiting season I will have faith and praise him till I’m blue! Won’t he do it, yes he will!

Emily Kinserlow | Houston, MO – The lie I believed is that we have to suffer our disappointments alone. Every time I stared at a negative pregnancy test praying for it to change before my eyes or a new cycle began the day I was planning to test, I felt as though I had to just keep it all inside and get on with the next thing to do that day. But, the truth is that I don’t have to hide in my disappointments. I can speak them out loud to others to become validated for my feelings. I can cry with someone and pray together. I don’t have to hold on to disappointment because there is so much more strength found in letting them go so that the Lord can hold me.

JoyBeth Costello | Wichita, KS – The lie I believed was that since we were given a diagnosis that said conceiving a child would be impossible, God was asking me to sacrifice my desire to be a mom; but the truth is that God gives us the desires of our hearts and there is nothing that is impossible with Him!

Kaitlan Merz | Delaware, OH – The lie so believed was that because I wasn’t getting pregnant, I wasn’t meant to be a mom and God has forgotten about me but the truth is God has plans for my life far beyond what my human eye can see. His plans are good.

Kaitlyn Kusky | Ft. Myers, FL – The lie I believed was that the doctors had the final say and my diagnosis seemed impossible but the truth is that nothing is impossible for our God and He will ALWAYS have the final say! He is a way maker and miracle worker.

Katt Tibbitts | Surprise, AZ – The lie I believed was that my testimony wasn’t enough because I didn’t have as “hard” of a time getting pregnant as some of my other TTC sisters. The truth is my testimony is more than enough and I have been told so many times that it has impacted more people than I could have ever even imagined.

Lauren Netherland | Plano, TX – The lie I believed was that I should be able to earn the gift of motherhood by doing everything right, but the truth is that motherhood is a gift from a good God who is rich in love and full of mercy. A lie this community believes is that we have been forgotten and passed over, but the truth is we serve the God who sees and never forsakes, who is close to the broken-hearted.

Leah Moore | Portsmouth, VA – The lie I believed was that my thyroid would always be a problem and would stop me from having kids. But the truth is that God is bigger than my issues, my diagnosis, my worries, and my biology. He came through with our miracle boy, naturally, almost one year ago and I’m beleiving he will do it again!

Liduin Bos | Netherlands – The lie I believed was that my miscarriage was my fault or a punishment from God for mistakes I made earlier on in my life, but the truth is that God grieved with me/us about the miscarriage and that by His grace He doesn’t punish me but already has forgiven me by Jesus sacrifice in the cross.

Lindsay Tankersley | Cincinnati, OH – The lie I believed was that my body was broken and imperfect, but the truth is that I am made in the perfect image of God and that he made me whole and complete.

Nicole Bantleon-Pierce | Green Bay, WI – The lie I believed was that I was supposed to privately carry shame about our infertility journey but the truth is the Lord wanted to use me during my darkest season to create community & help build His kingdom. Matthew 28:19-20, TPT

Rachel Ratledge | Hickory, NC – The lie I believed was that I was broken and unable to do what my body was created for. But the truth is I am made in his image and perfectly woven together for the purpose he has for me as well as a promise to grow our own miracle but in his timing not ours. He is faithful and comes over any diagnosis or stigma infertility may tell me

Tanesha Barr | Miami, FL – The lie this community believes is if you can’t get pregnant naturally it’s because children just “aren’t in the cards for you” or “that’s not God’s plan.” But the truth is if you desire to have children, that desire is a promise that came from God and He ALWAYS fulfills His promises.

Victoria Chandler | Winston Salem, NC – The lie I believed was that my body was broken but the truth is that God wonderfully and fearfully created me. He was always working in the brokenness to fulfill the story he started writing for me.

And me? The lie I believed about infertility was that in order to get a baby I had to strive, perform and prove to God that I was worthy of one. But the truth is He doesn’t need anything from me but my faith. Instead of striving I can rest in the finished work of cross and the promises that are in His Word!

You can see collaborative posts from prior years here:

What We Want You to Know About Infertility

Our Encouragement For During Your Infertility

Encouragement for the Woman Who Just Received an Infertility Diagnosis

What We Want You to Know About Infertility

What Men Want You to Know About Infertility

Why We Are Thankful for Infertility

1 in 8 go through infertility. These are our stories