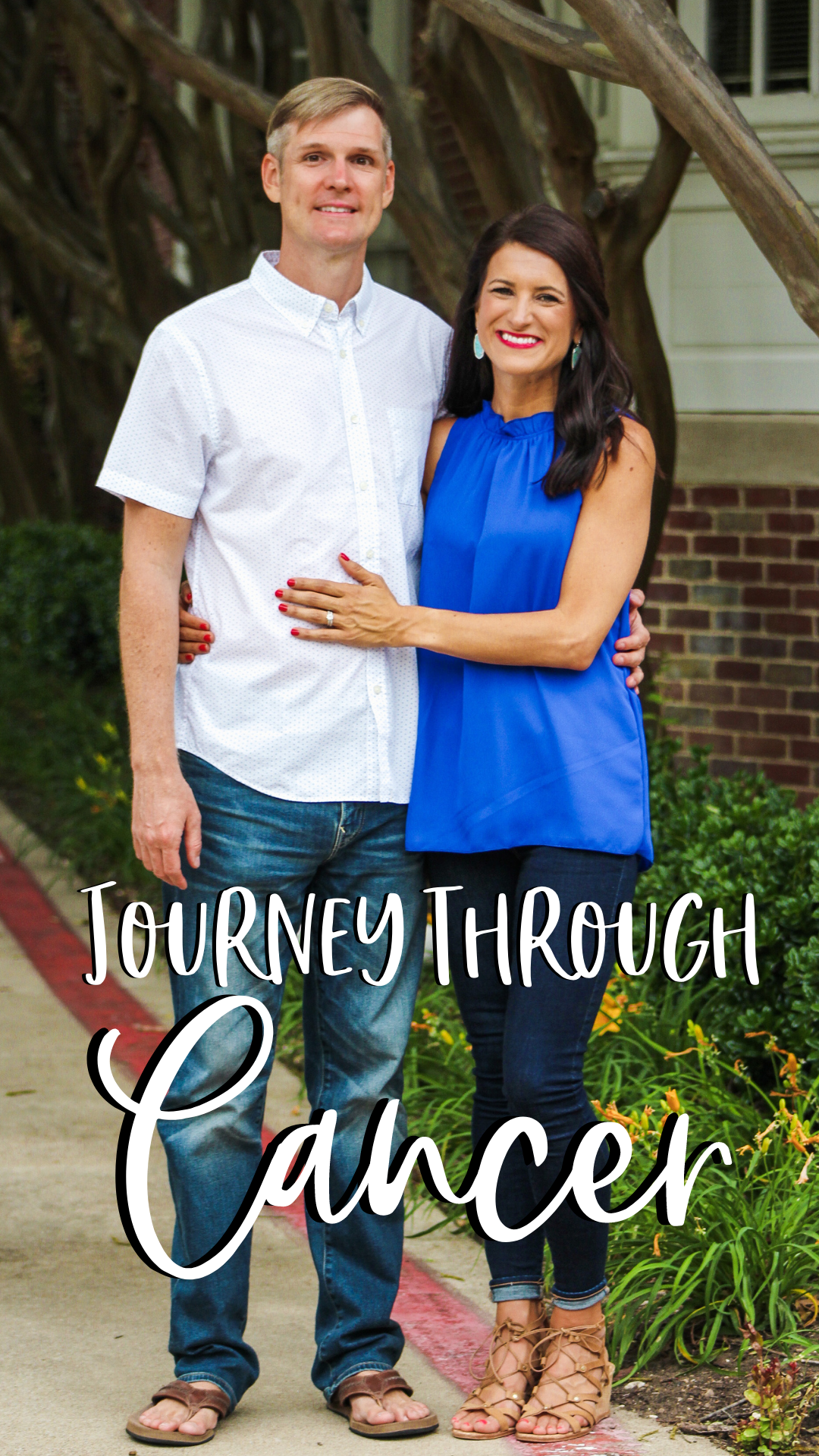 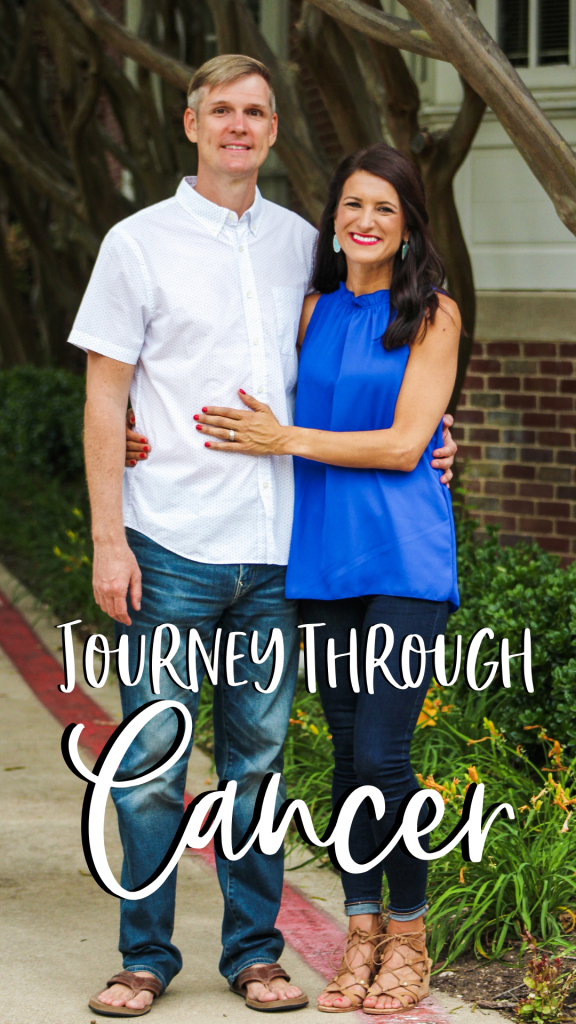 I never thought I would be making a post to share that my husband is 4 weeks into chemotherapy to eradicate the cancer in his body, but here we are. I am sure anyone who is in the middle of chemotherapy can relate to the sentiment “I never thought this would happen to me.”

Colby was diagnosed with testicular cancer 18 years ago. Thankfully no chemotherapy or radiation was needed at the time. He had surgery to remove the cancer and scans for the years following showed all clear.

Back in April Colby began to experience some stomach, side and back pain. The pain level was very low and mainly only bothered him at night. He would describe it as a nuisance more than anything. The pain came and went. It wasn’t consistent and when we began to discuss scheduling an appointment, it went away again.

In the midst of this, Colby and I went to Oklahoma to babysit our nieces and nephews and he flew to Arizona to visit his mom. He had mentioned the pain again so I booked an appointment with a doctor but when the appointment came around the pain was gone again so we cancelled. The following week the pain returned and I decided it was time to finally see what a doctor had to say about it.

Due to Colby’s health history and symptoms, the doctor immediately ordered a CT scan and the day following the scan, he delivered the news to us that a mass was found behind the stomach. We received this news at the end of the day on a Friday night and minutes later an oncology office called us to make an appointment for the following Monday.

At Monday’s appointment the doctor told us the plan was to take a biopsy of the mass to find out what kind of cancer it was. That plan quickly changed when we received a call from the oncologist on Tuesday and she told us we needed to get to the hospital. She had received Colby’s blood results back and was very concerned with some of his levels. So we packed up our things and made our way to the emergency department.

It was a long night and although they began running tests and administering fluids right away, we did not get admitted until the following morning around 11am. There were 4 doctor’s overseeing his care at the hospital and the goal was to bring his levels into alignment. Several more tests were performed while we were there too.

At 4am on Thursday we received news that they were going to perform surgery later that day to remove the tumor. Thankfully surgery went well and there were no complications. Recovery was slower than Colby had hoped, but he did well and the next day, after his levels were finally in alignment, he was released to go home. Going home after 3 nights in the hospital was truly the best feeling. I say that knowing many of you have had much longer hospital stays and much more serious medical conditions, but please know I am simply sharing our story and my perspective of it.

The goal once we got home was for Colby to rest and recover while we waited on pathology. I was in full-on caretaking mode making sure he had everything he needed and was in minimal pain.

Our oncologist called the following Monday around 10pm, but we missed it. Thankfully she called again first thing Tuesday morning to tell us that Colby was diagnosed with testicular cancer (again). We didn’t find out the stage until weeks later when our oncologist told us it’s stage 3 testicular cancer. Unless you are in the medical community or know a lot about cancer, you might not realize that testicular cancer can be found in many different areas of your body. Colby’s, as mentioned, was behind his stomach.

Even though we received this news, Colby was still in recovery mode and had a full week at home to recover before we made our way back to the hospital for another surgery to place the port and to do some preliminary tests necessary before beginning chemotherapy.

Colby’s chemo protocol began on June 13. It’s 9 weeks total which is made up of 3, 3-week cycles. The 1st week of each cycle is definitely the most intense, with 3-4 hours of chemo a day. He is currently finishing up week 4 and we are so thankful to report he is thriving through his treatment. We were given a long list of side effects he could expect to experience but thank goodness minus a headache he has had 0 side effects. What a testimony to God’s goodness.

I wish I wrote this post over a month ago, but truly I did not have the capacity to do so. This whole journey has definitely been exhausting for many reasons — emotionally, spiritually, physically, financially, etc. I have thankfully been able to catch my breath a little bit and here I am finally posting.

I want to thank each person who has sent us a gift card for food delivery and groceries. We truly would not have been eating so well without your generosity. The gift cards have helped carry us through. I want to also thank those of you who donated money towards groceries. In the midst of a lot of medical bills coming our way, it’s been such a blessing. I want to also thank each of you who have prayed for Colby! Your prayers are being heard. Thank you!

We are fully expectant that Colby will continue to thrive during these next 5 weeks of treatment. We are expecting nothing other than a cancer-free report at the end of this. We are trusting that the chemotherapy will not harm his body in any way but will only do exactly what it’s supposed to do. Our hopes are up and we can’t wait to continue to share the testimony of God’s goodness and faithfulness!! By His stripes, Colby was healed. Amen and Amen!

We would love your prayers specifically that all cancer leaves his body, his body and organs are completely protected, there would be no complications or side effects in the weeks to come and for a cancer-free report at the end of this 9 weeks.

PS. Today on A Cup Full of Hope Podcast I shared more about the past 6 weeks. You can listen to the episode on any podcast app.